Can I Receive Connecticut Workers’ Compensation For A Car Accident On The Job? 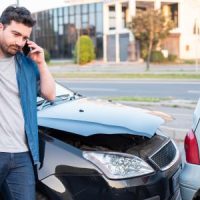 Something many employees are not aware of is that they are still considered ‘on the job’ if they are away from their employer’s premises, driving somewhere or otherwise engaged in work for their employer. This often comes up if an accident happens; the injured employee may have no idea that they are still ‘at work’ and thus may be eligible for workers’ compensation benefits. While it can sometimes be hard to determine whether you qualify, it may be a good idea to consult with an attorney so you can understand your options fully.

When someone is injured due to the negligence or recklessness of a third party (that is, not a coworker or anyone else affiliated with their employer), they have the right to both file for workers’ compensation benefits and to potentially seek money damages from the third party driver. While one might think that filing twice would somehow be inappropriate or unethical, it is not – workers’ compensation is a statutory claim, and does not permit the awarding of intangible damages, while personal injury claims do – in other words, workers’ compensation does not allow for awards based on intangible injuries like pain and suffering.

What will generally happen if an injured employee files for both workers’ compensation benefits and a personal injury suit against the allegedly negligent driver is that their employer’s insurer may seek what are known as subrogation rights. What this means is that if the injured worker receives both their benefits and a jury award, the insurer has the right to try and recover their costs for the benefits they may have paid out by then. If they do not do this, it technically leaves the injured employee with a double payday, which is frowned upon.

In general, if you have been injured in a car accident while within the “course and scope of employment” (which has a specific and demonstrable meaning under Connecticut law), you are generally able to file a workers’ compensation claim with a decent chance of success. If you also choose to file suit against the third party who allegedly caused your injuries, you may prevail, but you must be aware that your employer’s insurer will try to recover some of the money you receive. It is possible in rare cases to convince an insurer to waive their lien, but it is extremely rare that they will actually do so.

The key to most workers’ compensation claims is being able to show that your injury occurred while engaged in your employer’s business. This can sometimes be difficult to establish, but a knowledgeable attorney can help. The Stratford workers’ compensation attorneys from the Morizio Law Firm are ready and willing to try and assist you with your claim. Contact our office today at (866) 225-9496 for a free consultation.

By Morizio Law Firm | Posted on June 2, 2022
« How Can I Tell If I’m Experiencing Workers’ Compensation Retaliation?
High Temperatures Increase Risk For Workers »