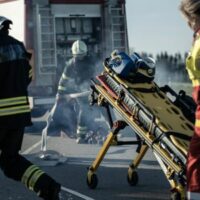 In 2019, Connecticut Governor Ned Lamont signed a law extending coverage for post-traumatic stress disorder (PTSD) coverage to police and firefighters. On June 30, 2021, Lamont signed an extension to the law that permits coverage for paramedics, emergency medical technicians (EMTs), emergency dispatchers and correction officers. This is an exception to Connecticut’s normal laws on workers compensation, which usually require a physical injury to have occurred before mental trauma can be covered.

The new law specifically adds coverage for the specified first responders not only in violent situations, but also for “qualifying events” related to the COVID-19 pandemic, such as witnessing the passing of a COVID-19 patient, or caring for a person who has symptoms that either were known to be COVID-19 or were later diagnosed as such. While there still remains a core of people who refuse to acknowledge its effects, most people admit that the global pandemic has caused wide-ranging societal trauma, and this law is a first step toward beginning to address it.

That said, even in general, it is more common than one might think to develop PTSD after experiencing a violent or otherwise traumatic event. An argument can be made that failing to take mental and emotional impairments into account along with physical injuries can lengthen an employee’s recovery period – in addition to the obvious humanitarian reasons for taking such impairments seriously, data from the Centers for Disease Control estimates that as many as 200 million collective work days are lost per year as a result of depression and anxiety.

The majority of U.S. states require workers’ compensation insurers to cover PTSD at least to some extent. However, the prevailing rule is that coverage for a mental health issue can only be extended if it occurred as a result of a physical on-the-job injury (with certain professional exceptions, such as first responders). Insurers are reluctant to cover a purely mental or emotional injury, both because they are notoriously difficult to assess, and also because it may be too difficult to assess which part of the injury was caused by the factors they experienced on the job. Only injuries sustained at work are entitled to coverage.

Under Connecticut law, “mental impairments” are only compensable if they “arise out of” a physical injury or occupational disease, for the average person – but the law surrounding first responders was passed because statistically, first responders are among the most likely to develop psychological trauma due to their jobs (particularly police officers). First responders still must show evidence of an on-the-job exposure to a traumatic event in order to get coverage, and will be denied if the evidence is not sufficient.

The new law benefits deserving Connecticut workers, but for those who do not work as first responders, they still must demonstrate that their emotional impairment came about as a direct result of a physical injury. If you have developed PTSD as a result of an injury you sustained on the job, the Stratford workers’ compensation attorneys from the Morizio Law Firm may be able to try and assist you with your case. Call our offices today at 475-338-3505 for a free consultation.

By Morizio Law Firm | Posted on July 16, 2021
« What Is ‘Maximum Medical Improvement?’
Workers’ Compensation In The Connecticut Construction Industry »